One of the healthiest summer habits is preparing an easy picnic lunch to eat with your loved ones. By all means cultivate it. When the weather is nice outside, take as many of your meals out of doors as you can conveniently manage. There is nothing like an outing in the open air to improve health or raise the spirits. Even an occasional luncheon or supper served out on the shady porch seems twice as appetizing as the same food eaten in the hot dining room; and if a little management is used, there is not a great deal of extra work. Be sure to pack everything carefully; messy-looking food is never greatly enjoyed. Wrap each sandwich separately, or if they are small and this is too much trouble, at least wrap the different varieties separately. The modern picnic kit has boxes and containers for everything. But an ordinary basket or packing box of convenient size, with empty tin cracker boxes or other various containers you can find in your cupboard will also carry a luncheon fit for a queen’s taste. The Popuppicnic.com.au caters picnic events for any business companies that want to celebrate their anniversaries. 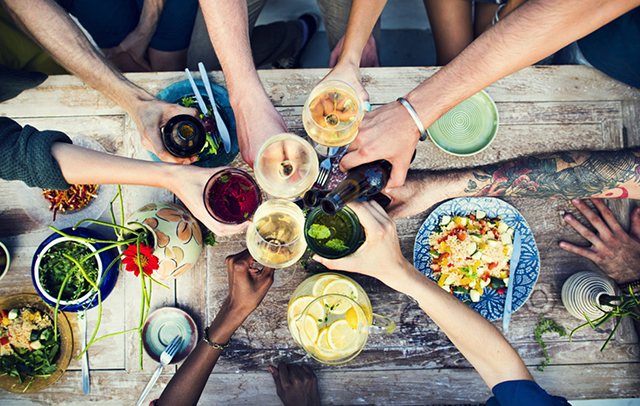 Following are some fun and easy ideas to make your picnic a little bit different and more special.

Sandwich Fillings: For excellent reasons, sandwiches are the mainstays of all picnics. They are easy to eat, and remarkably filling. Most people fall into a rut in regard to sandwiches they take to picnics. Ham, chicken, cheese or egg sandwiches are all right in their own way, but variety in sandwiches is just as pleasing as in anything else. Did you ever try to mix a little chopped green pepper in your cheese sandwiches? Sandwiches made of Boston brown bread baked with raisins, cut in slices and filled with cream cheese, or for an appetizer, sandwiches made of very thin slices of whole-wheat bread spread with a thin filling of snappy cheese sprinkled with horseradish are also popular.

Tomato or Cucumber Sandwiches: These are best when prepared just before they are eaten, which can be very easily managed even in a car, by slicing the cucumbers and tomatoes just before starting, packing them separately in jars or plastic containers, and then in a box packing slices of buttered bread or rolls, or biscuits with the halves put together with sheet of wax paper between so that they can be quickly pulled apart for filling. It is usual to take along a small jar of mayonnaise, and put a spoonful on top of the tomato or cucumber before the top of the sandwich is replaced. Crisp leaves of lettuce can be used in sandwiches in the same way. Such simple vegetable sandwiches are the most popular in the lunch basket on a hot day.

Peanut Sandwiches: Shell freshly roasted peanuts and crush them quite fine with a rolling pin, or run them through the food processor. To every two cups of peanuts use one cup of finely chopped celery. Make the whole into a paste by adding stiffly whipped cream. Season to taste with salt. Spread on thin slices of freshly buttered, whole wheat bread.

Chopped Meat Sandwiches: You can utilize any cold meat you happen to have for this. Ham, pork or corned beef are especially tasty. Trim the meat neatly and cut off all gristle, but leave in a little of the fat-not enough to make it greasy, but just enough to take away the dry taste that cold meat often has. Run through the food processor. If the meat is rather lean, moisten with melted butter, using a tablespoon to each cup of meat. Add a dash of pepper and salt, if required. Cold beef is better if a few drops of Worcestershire sauce or a spoonful of catsup or chili sauce are added to each cup of the chopped meat. Spread between thin slices of white or whole-wheat bread or split buttered white or rolls.

Pineapple Cake: This is rather delicious at a picnic to eat with the fruit that forms the most healthful dessert. Use your favorite receipt for layer cake, or try this one: Cream together one cup of sugar and half a cup of butter, add two well beaten eggs and half a cup of milk, and then stir in two cups of flour in which a heaping teaspoon of baking powder has been sifted. Bake in two layers.

Filling: Boil two cups of sugar with two-thirds of a cup of cream for ten minutes. Take from the fire and beat until thick and smooth. To one third of this add one cup of grated pineapple and spread between the layers; to the remainder add enough pineapple juice to make it spread smoothly over the top and sides, and then mix in one third cup of the grated pineapple to make the frosting rough with it. Before the frosting hardens, press into the center of the cake a slice of canned pineapple cut in points like petals and put a candied cherry in the center. The pineapple used for decoration must be well drained from juice and as dry as possible, so that it will stick to the icing.

Homemade Gingersnaps: Put in a saucepan one cup of molasses, add one half cup of brown sugar, and cook gently until sugar is melted. Dissolve one teaspoon of baking soda in two teaspoons of warm water, add to the hot molasses. Now add half a cup of butter that has been about half melted. Then stir in, a little at a time, two cups of flour in which have been mixed one teaspoon of ginger, one teaspoon of cinnamon and half a teaspoon of nutmeg. If too soft add a little more flour. There should be sufficient so that the snaps will roll out thin. Cut with a small cookie cutter and bake in a quick oven. These snaps should be very crisp. They are delicious with lemonade or fruit drinks.

Sponge-Cake Sandwiches: Add sweet cream to one of the small cream cheeses that come wrapped in tinfoil, until it is thin enough to spread evenly, add four coarsely chopped Brazil nutmeats or six English walnuts and a teaspoon of strawberry jam. Stir until well mixed, and spread between thin slices of sponge-cake.

Cheese Straws: These are delicious and easily packed. Sift together one cup of flour with one fourth of a teaspoon of baking powder and a pinch of salt. With a knife chop two tablespoons of butter into the flour, add one cup of grated cheese and a dash of Cayenne pepper and sufficient cold water to make a stiff paste and roll out very thin. Cut in narrow strips and bake on greased paper on the bottom of an inverted pie plate or shallow dripping pan. Sprinkle a few grains of salt over each finger while it is still hot.

Pineapple-Lemonade: This can be served icy cold. Boil one pound of sugar with six cups of water until they form a syrup. Then strain and cool. When cold, add to this, the juice of six lemons and one orange and a can of grated pineapple, both fruit and juice. Let the mixture get very cold in the refrigerator before pouring it in a thermos bottle.

Grape-Punch: This is a drink that has always been greatly appreciated whenever I have carried it to picnics. Make a quart of tea-it should be fairly strong for it is going to be very much diluted-while it is hot, add two tablespoons of sugar and let it cool. Then squeeze in the strained juice of one and a half medium-sized lemons and add three cups of grape juice. If you like your drinks sweeter, add more sugar.

Fruit-Lemonade: Make two-thirds as much strong lemonade as you will require, and to every two cups add one cup of fruit juice taken from the can or preserve jar, or drawn off fresh fruit by letting it stand in a wide dish heavily sugared overnight. Berries should be crushed slightly to get the most juice and pineapple shredded finely. Add a few of the crushed berries or some bits of the pineapple to the thermos or jug before putting in the cork.

Debi Geroux is the President of Purple Kitty LLC and webmaster of Kids Craft Ideas and Free Knitting Patterns which bring you craft ideas, free patterns and recipes.