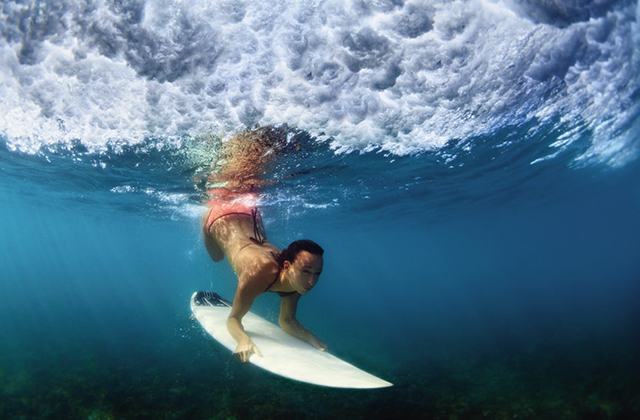 My morning started early and wasn’t particularly inspiring. The bedroom was chilly and through the window the skies looked overcast. The thought of pulling on a thick wetsuit and joining my wife in the cold pacific for a morning surf session wasn’t all that appealing. Just getting out of bed was challenge enough, but I did. Somehow, the fact that we were on a beautiful quiet sandy beach on the southern end of New Zealand was not lost on me. I had taken the time to take a much needed surf lesson the day before. Our plan had us leaving that afternoon and I didn’t know when my next chance to get in the water might be. My wife was up and gone already. As she was leaving I had promised I wouldn’t be too far behind. Plus, from the sound of the surf I determined the waves were small. Just my style. I took the short walk down the beach to my surf instructor’s house. He was there, up early, working in his garage. Welcoming me with a big smile, he outfitted me with the longest easiest board he had, the same one I had practiced with yesterday. I shimmied my way into my wetsuit, booties and hoodie and took the wooden steps down to the beach. Surfing app provides long range surf forecasts for thousands of spots around the globe.

The first few steps into the water were a bit of an eye-opener, especially at 7 am. The smell of the ocean, the fizz of the surf and the sensation of cold as the water permeated my wetsuit were enough to clear any remaining cobwebs from the night before. The waves were indeed small yet rideable. I walked knee deep and then bellied onto my board and paddled out. A couple of slappers over the nose and I was awake and fully alert. As it usually happens, once I was committed, ya know wet and moving with blood flowing and body in motion, I was psyched I had motivated.

Curio Bay is a wonderfully protected bay tucked into the southern end of New Zealand South Island. A strip of golden sand lines the water. Behind the beach grass that sits comfortably back from the ocean’s edge are 15 to 20 houses and a few hostels. Behind these structures is a narrow gravel road. There is no commercial center, no night-life and no “scene”. During the day, the few visitors we encountered were out strolling the beach with their pants rolled up and their dogs running free. The water was cold enough that nobody was swimming. In the afternoon if there was enough interest, the small class of aspiring surfers would take to the water in an effort to learn the nuances of catching waves and balancing on a surfboard.

Almost immediately after paddling out to join Tina, we saw the first ghostlike figure gliding under the surface. Dark and slim, it measured about 4 feet long. Apparently we were not the only ones to have motivated that morning. Then there was another, then another. We knew this bay was frequented by Hector dolphins but we had no idea we would be sharing our morning surf session with them. A moment later, the Hectors were all around us, underneath us, behind and in front of us. In true dolphin fashion, they swam in undulating sine-waves, arcing their backs above the surface. They swam like eagles fly, graceful and with ease, masters of their aquatic world. As the waves rolled in and we paddled into position so did the dolphins. With the lift of the wave and the thrust of momentum, the surf was on. Visible just below the surface, I could see small dark torpedoes all around me. Apparently, they too thought this wave worth catching. I stood up, or at least tried, only to lose my balance and ungracefully fall backward. The Hector’s carried on as if to show me how the pros do it. From behind, I could see the wave wash closer to the beach, with the submerged surfers still riding. Just as it broke, they vanished. As I bellied up and paddled back out they joined along side. One to my left, a few to my right and still a few more in front. They were almost within arms reach. As one swam particularly close, I glimpsed it smiling. Well, probably just my imagination, but I know I was. Amazing.

And so the morning went. As we surfed, so did they. They always stayed close and always had more success. As we paddled from one spot to the next, looking for the perfect take-off spot, they followed. As soon as we were on our bellies and moving they fell into formation. Always putting one dolphin ahead a couple on our sides. We paddled together, took off together and rode the waves together. Our interaction with them was silent and peaceful. There existed an undeniable cosmic connection. There seemed no “us” and “them” only we. Bound together in the fabric of the natural world we shared a special connection. We felt honored to be joined by the true locals.

As we learned later, what is commonly referred to as Curio Bay is actually Porpoise Bay. Curio Bay sits adjacent to Porpoise Bay and is much smaller and is home to an ancient petrified forest that now lies on its side cemented in the accumulated deposits of a million years of earth’s history. Porpoise Bay is appropriately named it seems. The Hectors find its protected waters a safe place to live and breed. While not uncommon to see them from shore, to surf with them is unique. As all things must, our wonderful morning had to end. We tired and the dolphins moved on. One by one they silently disappeared, off to do whatever it is that dolphins do. We called it quits and paddled back to the beach. As we made our way onto the sand, I could see Martin, my instructor, smiling from the dunes. I probably had not impressed him with my surfing skills but our shared session with the Hectors certainly had.

Going somewhere? For all the adventure travel gear you need for your next adventure and for more great “Tales From The Trip” visit http://www.adventuretravelsupply.com.