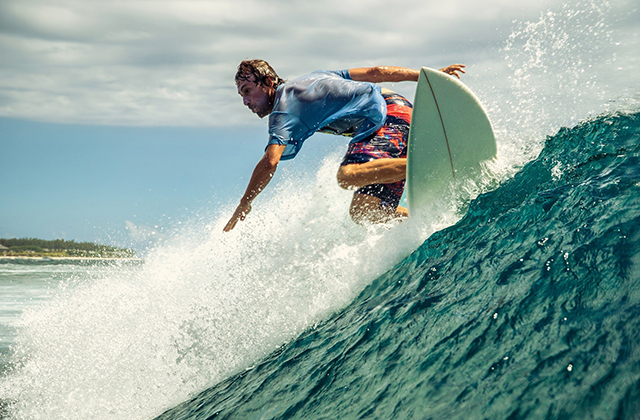 A few months ago, a friend called to ask if I’d like to join her on a surfing lesson at Manly Beach in Sydney. Giving thought to my answer, two images flashed to mind. My thirty-nine year old battle weary body, attempting to hang five with a gaggle of bewildered foreign backpackers and pointing school kids. And more vividly, the look on the faces of my settled couple and married-with-kids friends if they knew I was even considering the idea. Surf contest is way exciting than any other sports I knew.

Having recently broken out of Sydney’s Lower North Shore maximum suburbia and moved to fun-filled Manly beach, I had already become a prime suspect in their case against dirty-thirties attempting to recapture lost youth. It wasn’t that I’d been caught driving a red convertible sports car or acting suspiciously outside Botox clinics. However, I had been hauled into Fresco painted living rooms and interrogated under the glare of designer mood lighting over alleged mixed touch football games on weekends, bar hopping on school nights, and clubbing on any night, sternly warned that such activities were not something a self-respecting man of my age should be involved in.

“Sure, count me in” I replied. Breaking the news to the fun police couldn’t be any more embarrassing than having to answer the question asked of every male living in a beachside suburb, “So do you surf?” with a mumbled reply about body bashing in a pair of flippers. Besides, one lesson was hardly a commitment. It was like a speed date. I’d hook up with a few boards, share some laughs, make a fool of myself, and never be seen again.

The day arrived, and everything seemed to be was going to plan. Paddle out, thrash about like a puppet on amphetamines, catch a wave, attempt to stand shakily, fall off comically, try to laugh at ones self louder than at those around you, and start again. At this rate, I’d be back in the safety of the pub in no time, telling those who asked, “Yeah, I used to surf until I wiped out on a submerged German and did my back in.”

Then the most bizarre thing happened. After landing one particularly kind wave and staggering to my feet, the regulation left hook that had sent me crashing to the canvas all day never arrived. I was still standing, surfing right over the top of the remaining backpackers, while the school kids didn’t even register a bump!

There was no denying my giant esky lid was about the size of the QEII, and would have remained stable with an entire Central African government onboard, however, gliding across water with the sun on my face, salt on my lips, and sand in my shorts left me exhilarated in a way no Sunday night happy hour ever had. By the end of the lesson I knew that somewhere in a surf shop out there, a shapely piece of fibreglass was calling my name.

From an early age, I’d always loved Sydney beaches. Face-planting on a sandbank after catching a ‘dumpa’; having to “do a runner” across the scorching hot sand until we found a place to drop our towels; waiting ravenously in the shop line for a chocolate Paddle Pop and a pie n’ sauce with the sensation of course damp sand under my feet, and scent of salt caking bodies under my nose; the golden tanned girls who, well, just walked around being golden tanned girls. My transcendental surfing lesson aboard the HMAS Polystyrene left me wondering, “Why didn’t I try this years ago?”

Amongst a list of very lame excuses, only one seemed to have any validity. Fear. As a teenager without a car, it had been less frightening to stand in the local nets and watch cricket balls fly towards my face, or attempt, and often fail, to jump BMX bikes over 5ft ditches, than let golden tanned girls see me hanging out at the beach with mum and dad.

In my twenties, I was building a career, travelling the world, and discovering that there was more to a female’s beauty than the shade of her tan. By this time my parents were permitted to accompany me in public, however, the thought of prehistoric man-eaters licking their lips underneath my bobbing sea biscuit, and tales of 120kg neanderthals performing surfboard proctology on anyone who accidentally took their wave, ensured the closest I came to the thrills of surfing was through the eyes of a six o’clock sports news camera.

After the lesson I realised how irrational these fears had been. I’d seen dozens of board riders emerge from the sea every day. They all still had their torsos, and very few walked as if they had a surfboard stuck in their backsides. Never again would I allow an issue outside of my control to prevent me from living out my surfing dream!

Which meant I’d need a more tangible fear. It came to me just after the smirking surf shop grommet had taken my money and watched me leave with eight feet of fiberglass, a rubber suit, two packets of golden tan bikini girl board wax, and his sunglasses stand wrapped in my leg rope. Maybe my sensible friends were right after all? Perhaps I was pathetically holding on to a long lost youth?

Coyly making my way down the beach, I felt the stares of sunbakers boring into me, knowing exactly what they were thinking. A voice came over the lifesaver club speakers. No-one ever understands those announcements, but I heard it clearly, “You, the thirty-nine year old guy in the hysterically fitted wetsuit. Act your age. Put down the surfboard and move back between the flags. Nice and slow.” Just as I thought the game was up, I took one last look at the lapping water and realised I’d come to far to stop now. Mustering every ounce of courage in my entertaining frame, I clutched my board like a swagman with his tucker-bag and yelled, “You’ll never catch me alive”, crashing into the sea, leaving the world of epochlitically correct troopers in my wake.

I’ve been honing my paltry surfing skills for a while now and still find myself upside down more often than not, but it doesn’t matter. As any golf hacker will tell you, one sweet drive down the middle of a long straight fairway redeems 99 slices into the car park and dribbles off the end of the tee. Just give me one smooth ride on a glistening blue satin-sheet wave, overflowing champagne froth in my wake, and not a backpacker to be seen between my board and the beach, and this middle-aged delinquent will always be back for more. Because the only thing that scares me these days is imagining what life would be like if I’d never become a surfer dude.

Four things every late starter should know about surfing:

1.Physiological studies have demonstrated that surfing is an excellent form of exercise. An aerobic fitness study at Deakin University found that competitive surfers rate comparable to Nordic skiers and distance runners, whilst my study found it reduced budding man-boobs and wobbly love handles.

2.Male surfers have licence to stand at the back of the beach and ogle women for at least fifteen minutes longer than other men before being arrested, provided they at least pretend to be studying the swells in the water too. Female surfers have no additional ogling rights over other women because men only wish they all did it more often.

3.It is worth investing in a good quality wetsuit. In addition to their heating benefits, they evenly distribute excess body lard throughout the rubber skin.

4.No matter what your mates tell you, a wetsuit should be worn with the zipper at the back. I promise.

Best places to learn to surf in Sydney:

Simon Hillier is a freelance writer based in Sydney, Australia. His company, Get There Writing Services, provides copywriting, travel writing, feature articles, scripts and ebooks that will have your readers clicking and streaming for more. For further information on Simon’s article services, visit the feature articles and travel writing section of the Get There Writing Services website.